Climbing has always been a natural way to move from one place to another in difficult terrain, in mountains or in thick forests. In mountainous countries it is still a part of everyday life, and some indigenous groups get their food by climbing up into the trees. In industrialized countries, climbing is a part of trekking and other activities in mountaneous or hilly areas.

Today, there are many sports that have been developed from different climbing techniques, such as indoor, rock, tree and ice climbing. Before starting your climbing hobby, it is recommended that you get to know the safety standards either independently or with a professional by taking a course on the topic.


Top rope climbing (or top roping) is a style in climbing in which the climber is securely attached to a rope which then passes up, through an anchor system at the top of the climb, and down to a belayer at the foot of the climb. In lead climbing, a lead climber attaches themselves to a climbing rope and ascends a route while periodically attaching protection (quickdraws or traditional protection) to the face of the route and clips into it. 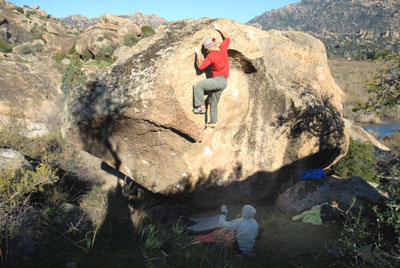 Bouldering is a form of rock climbing that is performed on small rock formations or artificial rock walls, known as boulders, without the use of ropes or harnesses. While it can be done without any equipment, most climbers use climbing shoes to help secure footholds, chalk to keep their hands dry and provide a firmer grip, and bouldering mats to prevent injuries from falls. Artificial climbing walls allow boulderers to train indoors in areas without natural boulders.

Via ferrata is a long vertical climbing route with an amazing scenery. The climber needs a via ferrata belay device, harness, helmet, climbing gloves and hiking or approach shoes. The essence of a modern via ferrata is a steel cable which runs along the route and is periodically fixed to the rock. There might also be ladders, bridges, etc. The easiest routes are a piece of cake also for beginners.

The Via Ferrata trip of our staff:


More information about Via Ferrata [Wikipedia]

Ice climbing is the activity of ascending inclined ice formations. Usually, ice climbing refers to roped and protected climbing of features such as icefalls, frozen waterfalls, and cliffs and rock slabs covered with ice refrozen from flows of water. The ice climbing is quite similar to rock climbing even though there are differences in terrain and equipment. Sometimes the same wall can be used for rock climbing in summer and for ice climbing in winter. Ice climbing doesn't depend on time of the year if the area is high enough or in arctic zone where ice occur also in summer.