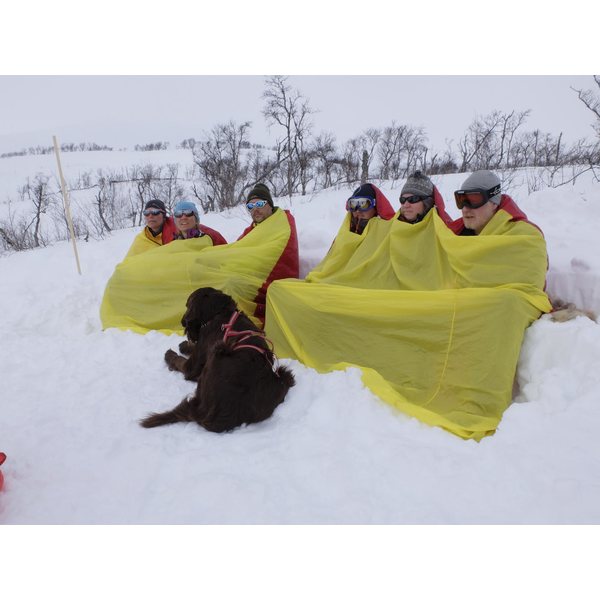 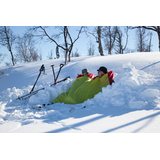 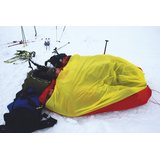 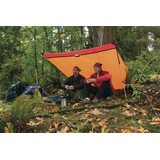 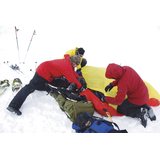 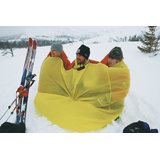 Windsack was originally conceived as an emergency bivy bag for up to three people, but it has proven itself just as useful as a portable, temporary refuge from inclement conditions during ski tours, but also for hiking or climbing trips. This new, upgraded Windsack retains its highly breathable and water repellent front (now yellow), and gets a fully waterproof, silicon-coated nylon back for improved functionality in snow or very wet conditions.

TEMPORARY SHELTER
For a quick shelter, use the Windsack’s corner loops to rig a windbreak. For more shelter, simply deploy the Windsack, climb in and hunker down out of the elements. Ideally, you should dig out a dedicated spot in the snow or find a place that has some protection from the wind. But once inside, you can enjoy a snack or a rest break, change clothes, even deal with equipment issues or administer minor first aid. The Windsack’s waterproof back/breathable front configuration, multi-slider zipper, and cinch-able bottom hem also make the Windsack useful as a sleeping bag cover for tarp camping.

EMERGENCY USE
The Windsack is remarkably adaptable. As an emergency bivy bag, it will accommodate up to three people with sleeping pads and sleeping bags. An integrated safety line prevents the Windsack from blowing away in strong winds while you’re getting into or out of it, and four corner loops let you anchor it in exposed terrain. The zipper at its head has four sliders for making either head “holes” or venting ports, and a draw cord in the bottom lets you cinch the Windsack around the occupants’ feet. Its waterproof back and breathable front make it a good choice for use in snow caves, and it can also be staked out, red side up, as a rescue panel to signal for help from the air, or it can be rigged as an improvised tarp.

In Sweden, a windsack has long been considered indispensable for winter ski tours. Originally, the Swedish windsack was a kind of modified, narrow ridge tent without floor, constructed to be set up between two skis and designed as an emergency shelter. In the late 1970s, after traditional windsacks proved inadequate in many situations, Bo Hilleberg created the first Hilleberg Windsack. Taking as inspiration the simple climber’s bivy bags used in the Alps, he created a three person bag with a waterproof back and breathable, water repellent front. At the time, fabric technology made the first Windsack heavy, so the next version was made completely with the breathable fabric, significantly lightening it. Today’s silicone-coated nylon allowed us to build this new Windsack along the lines of the first version, with full waterproof back and breathable front, but in a much lighter package.